Simone Estelle Schaller Kirin (August 22, 1912 – October 20, 2016), who died last week at 104, was an American athlete who competed in two Olympic Games. After the Olympics she married a minor league baseball player and auto mechanic and worked as a food manager at Temple City High School. At the time of her death, she was considered the world's oldest living Olympian.

At the 1932 Summer Olympics, in Los Angeles, Simone Schaller finished 4th in the 80m hurdles event and in 1936, in Berlin, she was eliminated in the semi-finals in the same event. Originally from Connecticut, she moved to California at the age of seven because of her father's asthma. Although she was athletically active during her school days, she had only taken up hurdling three months prior to her 1932 appearance and both of her Olympic placings were disputed at the time.

Schaller tied Babe Didrikson Zaharias for the world record in the first round of the 80-meter hurdles at the 1932 Games. Schaller finished fourth in the final behind Didrikson, who set another record. The Olympic historian David Wallechinsky said that Schaller had taken up hurdling only three months earlier. At the 1936 Olympics in Berlin, Schaller made it to the semifinals. She had won the hurdles at the 1933 United States championships. 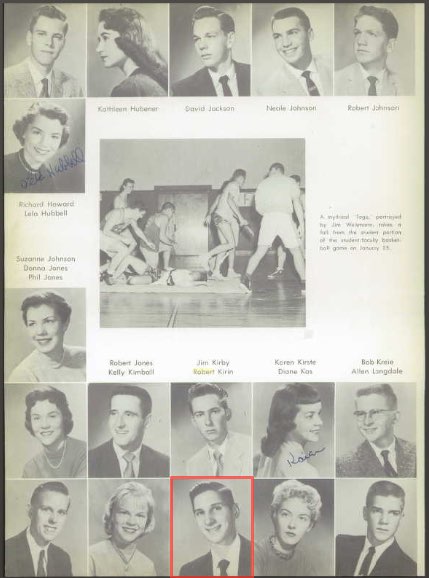 Schaller's son Robert J. Kirin was a member of the Class of 1957. Classmates and other friends may wish to comment below. (Click images for larger formats.)


(Ed.: This deserves some research to determine the dates Mrs. Kirin worked at TCHS, apparently starting around 1967. Volunteers, please contact the editor. An extended life story appears in Wikipedia. Thanks to Joe Walker for calling this to our attention via Facebook. RC)

I've been reading that Simone Schaller, an Arcadia resident who competed in the 1932 and 1936 Olympics, died at 104 years old at her home. Her Wikipedia page says she worked at a high school in TC. Does her name ring a bell?

Simone Schaller - Wikipedia
Simone Estelle Schaller Kirin (August 22, 1912 – October 20, 2016) was an American athlete who competed in two Olympic Games. At the 1932 Summer Olympics, in Los Angeles, she finished 4th in the 80m hurdles event and in 1936, in Berlin, she was eliminated in the semi-finals in the same event.[1] Ori...
EN.WIKIPEDIA.ORG

 
Diane Markland Tanner I looked her up in the 1964 Templar Annual (on line at Classmates) and there she is with the rest of the Cafeteria Ladies. I never heard about this. It would have been so nice for her to speak at an Assembly sometime about her Olympic experience. I wonder if anyone at TCHS knew.
October 26 at 4:04pm

 
Rees Clark She's not in the 1960 yearbook cafeteria photo. Keep it up; we can home in on the dates. Since TCHS has no official, comprehensive list of former students, they probably don't have one for staff, either. I agree it was a loss for all that she was not m react-text: 248 ... /react-text See More
October 26 at 5:08pm

 
Janice Helmer She is listed with 1968 kitchen staff. Says she had two sons, they must have attended TCHS.
October 26 at 5:30pm

 
Jerry Jambazian She belonged to the Temple City Tennis Club and was an active member until I stopped playing about 8 years ago. I knew her as Simone Kirin at 9636 Ancourt.
October 26 at 4:26pm

 
Joe Walker Great factoid. You are the first person to say they actually knew her. She was playing tennis until she was in her mid-90's! I sure hope you let her win a few sets... : )
October 26 at 6:59pm

 
Jerry Jambazian I really feed bad now. Out of sight, out of mind. I always knew she was an Olympian and bragged on her often. Only if I could go back in time I would have encouraged the city to do a story in their Connect Magazine on her accomplishments. One of my favorite sayings is "If you live long enough, life will destroy your trophies".
October 26 at 8:07pm

 
Duffy Brook I just read an interesting interview between her and George Hodak from August, 1988. She went to Monrovia High. She said she had worked in food services at TCHS for 25 years so that means she probably started in 1963. If you want to read it go to Simone Schaller Kirin LA84 Foundation.
October 26 at 5:24pm

 
Joe Walker Such a shame that the historical society isn't online and doesn't write or publicize this stuff. Her funeral was yesterday. Her neighbors who said she was a great lady didn't even know she died and they are really sad to have missed her funeral.
October 26 at 6:59pm

 
Jerry Jambazian I am a member of the Historical Society and it is everything they can do to remain a viable organization. They are graying just like our Kiwanis Club. I wish I had the time to help them be a presence in social media and on the internet but I am busy w react-text: 584 ...
October 26 at 7:44pm ·

 
Elisa Simpson Alcon Yes I remember her she was in charge of the cafeteria. She was react-text: 629 Sherri Reichard M /react-text grandmother neighbor. So sad.
October 26 at 10:19pm

 
Elisa Simpson Alcon Sherri Reichard remember working at lunch with her and hanging at your gma's. Also remember our hunted house we did
21 hrs

 
Simone Schaller, Hurdler Who Competed in 1932 Olympics, Dies at 104
NYTIMES.COM|BY THE ASSOCIATED PRESS

 
Sherri Reichard M WoW. Good for her. Simone was lovely, AND FIT person.
She was my grandmothers neighbor.Elisa Elisa Simpson Alcon is right. She lived on Ancourt St. She was a tennis player almost daily, she walked across the street to the high school to play an walked react-text: 868 ... /react-text See More
Yesterday at 2:26am

 
Michael Amodei Unbelievable story. So the real world class athlete at TCHS during that era was not the teenage football player but the humble cafeteria lady who was a world-class Olympian.
Yesterday at 12:20pm

 
Jan Wolff I grew up as her neighbor, from 1952 when my parents bought a house on Anouurt
22 hrs

 
Martin Moreno why not somebody keep track of (or shoot a photocopy) of ThisVery set of posts..They just may be the most extensive commemoration this extraordinary lady gets in TC- world outside her family & frinds