🏠 ⚙ 👤 TCHS Alumni News
Alumni News
☰
Miscellany
Don't shoot; I am not black!
The recent Michael Brown affair in St. Louis has reminded me of a similar earlier event. In 1977 a high school classmate of mine named Ron Burkholder was shot and killed by an LA police officer after being confronted for bizarre behavior, namely running naked through the street and playing Don Quixote at the mill, tilting in this case at a phone booth. At least one witness said he had his hands up when the cop fired.

Ron was the classic high school intellectual. Quiet, speaking mainly only to the other bright boys. I cannot remember his non-academic interests. He earned a scholarship to Johns Hopkins. He walked away from his high school graduation over some petty nonsense with a petty administrator, his scholarship having obviated the need for a diploma.

He later graduated in chemistry according to online sources (I never saw him after HS). He had various research interests, apparently including the wonderful world of recreational chemistry, which perhaps contributed to his tragic end, given the testimony of his behavior that night.

The affair led to considerable public outcry, and the city police and many other agencies were forced to change their use of force policies as a result.

One Richard Cohen produced a documentary of the event in 1980. The excerpts are eerily evocative of the past month in MO; only the races are changed to protect the innocent and the guilty.

It’s interesting how the news media, who are of course now made up of people younger than the event, have not made the connection. I asked around among people I know who knew him, and even some classmates are unaware of it.

If you're interested, a Google search on "ron burkholder lapd deadly force policy jerry brown william gates" will give you a good starting point.

This year's parade is Feb. 21, and the festival runs from Feb. 20 through Feb. 22. The Calendar has more information. 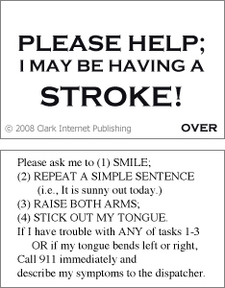 Strokes are never good, but here's a way to mitigate damage by seeking help fast. Victims often know something is wrong but have trouble communicating verbally. Or you might see someone acting oddly or clumsily. Doing nothing or making a cute comment rarely helps; instead...

Click the adjacent image; when the larger version appears, right-click it and save to disk. Now print it, fold it (glue it together) and put it in the topmost plastic insert of your wallet or the wallet of a loved one. Train them and yourself that in the event communication is difficult a stroke is possibly the reason. You/they should show the message to ANY passerby (pride, vanity and embarrassment will not save your life; action might).
Jun 11, 2008 | Link | 0 Comments
Brighten up your Computer Screen
Judy Million Pirrie '60 sent along this link to a useful computer maintenance tool. We find it achieves her intent perfectly.

Mar 18, 2008 | Link | 0 Comments
Carlin Proposes Rule for 2007
Comedian George Carlin wishes the 'net would " Stop giving me that pop-up ad for classmates.com! There's a reason you don't talk to people for 25 years. Because you don't particularly like them!? Besides, I already know what the captain of the football team is doing these days--mowing my lawn."

There's another reason: The real info about TCHS alumni is at tchsalumni.org. This would be a good time to register, or if you are already registered, to update your contact information. We will be adding some new features this summer, and we don't want you to miss out.
Posted by reesclark60 - May 24, 2007 | Link | 0 Comments
ASSOC. EDITOR NEEDED Info
Prefer a TC or other local resident to keep us abreast of happenings there. Please write to the editor if you are interested.