🏠 ⚙ 👤 TCHS Alumni News
Alumni News
☰
TC Community
Footballers 1977: Inquiry; Can You Answer?
A visitor asks: Hi, i've been wondering for decades who the defensive lineman was on your champion 1977 football team. He was this MASSIVE, quick, viscious nightmare of a defensive tackle or defensive end who completely shut down our potent offense in the 2nd round playoffs. i was the ball boy/equipment manager and my brother was the nosetackle (patrick Hamrock). Everybody just referred to him as "GIANT"--including our head coach Harry Robinson. during half-time in the locker room, the whole 20 or 30 minutes was devoted to overcoming "GIANT"! Of course, Don Roberts destroyed our defense that night too. That was a hell of a great team.
—Ted Hamrock, 1/14/2020
Jan 16, 2020 | Link | 0 Comments
Former Oak Ave. Teacher Ronda Carlson Celebrates 80th Birthday
I've received the following from Dean Carlson regarding his mother, Ronda Carlson, a former Oak Ave. School yearbook advisor, English and home economics teacher from 1970 to 1998, who is turning 80 years old on the 18th of January.

Her son Dean Carlson asks, "Please send a brief note to her through my email. How she made a difference in your life I would like to see just how many people's lives she touched through the years , I'd like to share with her this info while she can still comprehend the magnitude, impact she had on all you. I believe some 8000 students over 28 years went thru her classes. In advance I would like to thank you. This will be nice to hear how she touched all your lives!!!!"

Editor's Note: Registered members can also comment below within this article.
Update: It would appear not too many people discovered this article before the actual date of interest. If you're a late arrival, I'm sure Mr. Carlson would still like to hear from you. —RC
Posted by reesclark60 - Jan 17, 2019 | Link | 0 Comments
Former TCHS Teacher Martin Leska is Apparent Murder Victim 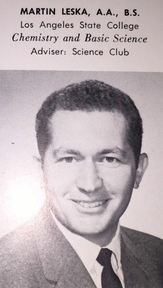 Pasadena Star-News reports: Authorities on Sunday released the identity of an elderly man who was found stabbed to death inside his Temple City early Saturday, Dec. 16.

Martin Leska, 83, was pronounced dead at the scene once he was discovered by deputies suffering from at least one stab wound just after 6 a.m. Saturday inside his home in the 500 block of Alessandro Avenue, according to Los Angeles County sheriff’s officials and coroner’s records.

(UPDATE: January 10, 2018 — Members of a related Temple City site on Facebook.com have reported that a suspect in the crime was apprehended and to be charged with the crime. According to the Pasadena Star News, "Homicide detectives have identified a man already in jail in Orange County as a suspect in the fatal stabbing of an 83-year-old man inside his Temple City home last month, officials announced Thursday. Jose Rosales Casas, 28, is suspected of murder for the slaying of Martin Leska, whose body was discovered on the morning of Dec. 16 at his home in the 500 block of Alessandro Avenue, according to Los Angeles County Sheriff’s Department officials and Orange County booking records. He has been behind bars in Orange County since Dec. 15 due to an unrelated criminal case, records show." See also This report.

(Leska was a former science teacher at Temple City High School. Many former students have commented on a related page at Facebook.com.)

No motive or suspect description was known in the attack, according to Deputy Juanita Navarro-Suarez of the Sheriff’s Information Bureau.

“Detectives have learned that at approximately 5:50 A.M., Temple Station deputies responded to the location regarding a ‘check the welfare’ call,” she said in a written statement.

Deputies discovered the elderly victim had suffered, “at least one stab wound to the upper torso,’ Navarro-Suarez said. An autopsy was yet to be completed, coroner’s Investigator Rudy Molano said.

Public records indicated Leska had owned the home for more than a decade.

(The accompanying photograph is from the 1959-60 Temple City High School yearbook.)

TCHS football will benefit from a series of fund-raising activities this fall. Please review the linked events and consider participating, whether or not you live in the area. We will display posters for the next event as they occur. 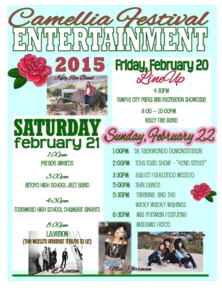 See the adjacent poster for a partial list of musical events during the Camellia Festival. Be prepared for surprises.
Feb 8, 2015 | Link | 0 Comments
Robin Alexander Koshiro Clark 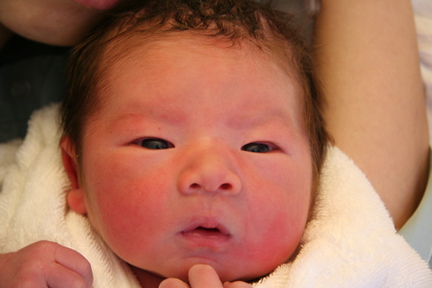 At the risk of seeming to use this venue for my own purposes, and since I've received precious little news recently, I'll take this opportunity to introduce my new grandson, Robin Alexander Koshiro Clark, born August 16, 2007, in Tokyo. Click the pic. Larger version of photo available on mugs, t-shirts and handsome wall plaques, soon; watch this space.

BTW, we're happy to announce all manner of life events. Registered users can add News easily while signed in; just go to the News Log and find the New Post link. We ask only a modicum of decorum and NO advertising content, which will be removed as soon as discovered.
Aug 26, 2007 | Link | 0 Comments
The Santa Ana Wind that Ate TC
No doubt in theaters soon. The LA Times reported this week...

"Cities across the suburban San Gabriel Valley remained crippled Thursday night, with city officials warning that fallen trees and branches may not be cleared for up to four days.

Along Live Oak Avenue in Temple City, Brian Haworth, assistant to the city manager, said there were 14 downed power lines and split poles between Primrose and Baldwin avenues.

"We have power lines hanging in the middle of the street," Haworth said. Fallen trees still blocked access to roads.

The problem with putting the power back on in Temple City is that Southern California Edison crews haven't yet been able to scour every single area to find downed lines, Haworth said. If the electric grid is turned on without a thorough search, it could risk someone getting electrocuted from a live wire.

Temple City's business district on Las Tunas was also without power, and Edison was preparing to erect portable lights on streets for illumination A Ralphs supermarket was hurriedly trying to sell ice and eggs early Thursday. About 30 homes were damaged in Temple City, and up to 200 trees toppled.

With so much tree debris, Haworth said, he hopes that roads and driveways would be cleared by Monday. The city is also asking for increased patrol by sheriff's deputies.

And with a section of the city without running water – possibly because water pumps require electricity -- Los Angeles County fire crews brought in mobile water tanks, just in case. Much of Los Angeles County is a red flag warning, conditions that could easily cause a wildfire."

Dec 3, 2011 | Link | 0 Comments
UPDATE: Is this your class ring?
The editor has received notice of the finding of a ladies ring, Temple City HS, Class of 1964. Engraved on the inside of the band are 3 initials, the last name begins with a "G." The finder writes "I understand how some these items may be wonderful keepsakes of milestones in our lives. Would like to return it to the rightful owner." If this information plus a bit more can connect you to the ring, contact the editor for more information.

UPDATE 5/4 - An intrepid Class of '64 detective team is on the case. We'll leave this item active for progress reports.
Apr 17, 2010 | Link | 0 Comments
High dudgeon over TC f'ball coach departure
After a single season, head football coach Anthony White is on his way to greener fields (didn't he notice the TC colors?). A running conversation - a bit circular to be sure - continues on various blogs. Here's an example. 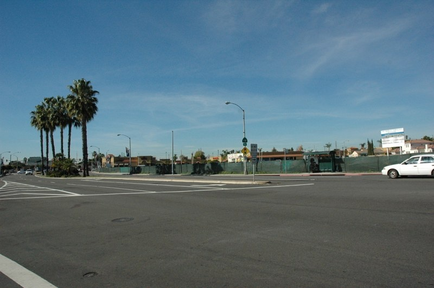 The TC "Piazza" continues its controversial ways. Namely, no progress. Several recent reports indicate the proponents have not come to grips with community and city demands regarding design, parking and other issues.

Older alumni remember, of course, the original Temple Theater with its western motif - including wagon-wheel fences. That structure was demolished in the 1970s to make room for a small multiplex, now also gone.

The project has not been free of political and legal controversy, with civic officials and project developers accused of bad design and legal malfeasance.

This dominant location at Rosemead and Las Tunas deserves quality redevelopment by people who care. The corner helps to define the town, and in our opinion should not be given free rein do do less.

Design as seen by the architects.

Outside.in (news digest linking to several articles)
Feb 22, 2010 | Link | 0 Comments
Details emerge in TC corruption probe
Temple City Councilwoman Judy Wong received six bribes from a local developer totaling $13,000 - taking half of some payments in cash and half in checks she gave to politicians she favored, according to newly released grand jury transcripts, according to a recent SGV Tribune article.

The proceedings led to the grand jury's 21-count indictment against Councilwoman Wong, former mayor Cathe Wilson, and former City Council candidate Scott Carwile. The three were charged with bribery, perjury and other crimes after the indictment was unsealed June 10.

The three were indicted Wednesday on charges of perjury and soliciting and receiving bribes from a developer in exchange for supporting his $75-million mall project.

Jun 11, 2009 | Link | 0 Comments
TC Piazza future undetermined
Temple City's Piazza mall project "could become a barometer for the local economy, a symbol that it may not accept willingly. There are signs, however, that Temple City could pull this off and maybe kick the Valley's retail economy in the behind," according to a report in the Pasadena Star-News.

The project has been stalled amid several restarts and redesigns.

(Ed. note: Are you in or near TC? If you would care to send us an original photo of the project we would appreciate it. Please indicate the date. All materials are attributed to the contributor.)
Apr 19, 2009 | Link | 0 Comments
US Jobs Package Could Benefit TC Schools
Temple City Unified School District would get about 2.8 million in stimulus funding under one version of the current economic recovery stimulus package now making its way through Congress, according to US Rep. Adam Schiff (D). California is projected to receive more than $32 billion under the proposal. Of that, 5.45 billion is slated for public schools, Schiff said. 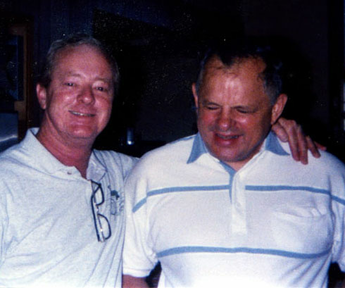 After many years teaching in Temple City, Dr. Bill Schmidt moved to Lone Pine, CA, where he became Superintendent of Schools. In the 1950s and 60s, being a blind teacher made one an instant celebrity, but most students came away understanding Schmidt's star qualities transcended his disability.

"The accompanying photo of (us) was taken in 1995 when I roasted him at his retirement in Lone Pine, CA. At that time, he was Superintendent of Schools in Lone Pine and I lived in Ridgecrest, which is just a bit south.

"I had the speech all planned, but had to intervene when I said, 'Bill...you haven't changed a bit!' There was going to be some reference to Grecian Formula, but he spoke up and said, "Geez Ray, I thought I was blind!" That brought the biggest laugh of the evening."

(The editors invite registered users to submit their Bill Schmidt stories. While you are signed in a comment form appears below this article. We suggest you write your story off line and paste it to the form, lest all those good grammar teachers from TC schools arise and castigate you for your spelling.)

Where is Lone Pine?

Mar 4, 2008 | Link | 1 Comment
ASSOC. EDITOR NEEDED Info
Prefer a TC or other local resident to keep us abreast of happenings there. Please write to the editor if you are interested.