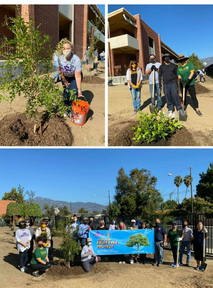 Students may not have been on campus that November day during the Covid-19 closure, but in their absence the superintendent, principal, assistant principal, board members, and staff of Temple City High School stepped up to plant the school’s new 30-tree orchard!

It took a lot of hard work and patience to bring these fruit trees to the school. They appear to be in good hands here and will go to good use for Temple City students and community. Vitafusion Gummy Vitamins provided support to this project! FruitTreeProject

Veteran TC folk will recall that fruit trees were ubiquitous in the early history of the town. Among the many inducements to settle the area, the availability of small plots suitable for orchards was fundamental, and anyone over 70 will recall that many households had orange, lemon, grapefruit or avocado trees. The slope from north to south with little relief enables a "mountain and valley" wind that keeps temperatures steady, and the shallow water table and sandy soil make cultivation easy.

The Facebook source did not identify the persons depicted.
Nov 26, 2020 | Link | 0 Comments
Brighter Side Singers and Friends Take on Hallowe'en and More
<
Oct 30, 2020 | Link | 0 Comments
San Gabriel Mission Damaged by Fire, Roof & Pews Lost
Historic San Gabriel Mission came close to destruction July 12 in a fire of unknown origin. The blaze destroyed the roof and many of the pews, along with some artwork. Much of the contents of the building had been removed for a renovation in anticipation of the Mission's 250th anniversary in 2021. A complete assessment is in progress.

The building was completed in approximately 1806 after the mission was relocated from its original location at Whittier Narrows, founded in 1771. An active congregation has worshipped at the Mission for over 200 years, and it has been a focus of study by generations of students in the region, including TCHS students from most classes in their fourth grade year.

The Mission was the starting point for the families who walked the nine miles west to found Los Angeles in 1781, and it was the source of population for several other Spanish and Mexican era settlements, making the Mission the birthplace of the birthplace of many if not most TCHS alumni. The Workman and Temple families instrumental in the founding of Temple City and many descendants were reputedly parishioners at various times.

Contributions to reconstruction can be made at the following link.

Most news outlets have additional details. This article will be updated.

Posted by reesclark60 - Jul 12, 2020 | Link | 0 Comments
Microsoft Blocks TCHS Alumni Mail
NOTICE: We are currently unable to send notifications to persons whose emails are at Hotmail, Live, MSN or Outlook. The good folks at Microslop have designated our hosts's mail server as a spam source, which is not true, but remains a problem. This is a well documented failing of the Microsoft mail systems, which receive so much spam that they cannot cope, so they do not render any aid to small providers who cannot break through the morass of roadblocks. If you are a specialist in this arena, we would welcome suggestions; please use the Contact form at the bottom of any page.
Jul 17, 2020 | Link | 0 Comments
Social Distancing Photo Contest
This would be a good time to sign into your profile and post a photo of yourself (and family?) engaged in social distancing, even better if you're in secret identity mode. We're inspired by Judith Arielle Golden '71.
May 26, 2020 | Link | 0 Comments
David Matuszak '71 conveys love of surfing in extensive compilation 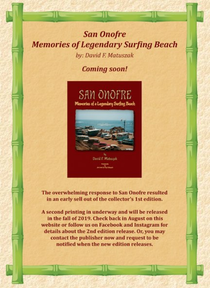 David Matuszak '71 has recently published a collection of essays and photographs of surfing in and around San Onofre, CA. Pacific Sunset magazine has a excerpt of the image gallery and a stack of very complementary reviews, a few of which follow. Having no expertise in the subject, we defer to these readers, whose enthusiasm is contagious, which could make the current recommendation to stay home more tolerable as you imagine yourself bobbing up and down waiting for the Big One.

I just wanted to let you know that I received your book! My goodness, I picked up the box and I thought you sent me a few copies by mistake. To find out that was only one book was staggering! In regards to any aspect of surfing, I think you compiled one of the most comprehensive collective on the subject.
—Barry Assadi

I am so impressed with your ability to gather, catalog, and organize this book and to provide such a wonderful narrative for it…Congratulations! on an important history of surfing and San Onofre. I know it must have been a true labor of love.
—Dr. Carla Lane

I can go on and on about your book but I’ll just keep it short. I gotta say this book to me is incredible and the history and the way it go’s in different directions of history on all sides. it’s really a masterpiece and thanks for your big efforts and your time spent. It’s so well done and I’ll be reading and looking at the photos for a long time and thanks for including me. What a big stoke, thanks again.
—Brian Bent, retro San Onofre surfer 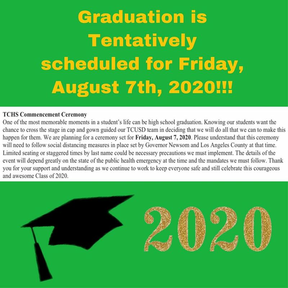 Due to the COVID-19 emergency, graduation will not occur on schedule in June. A planning group has set August 7 as a probable replacement date. Click image for larger view. Stay tuned for updates!
Apr 25, 2020 | Link | 0 Comments
TC Jr. HS Football Cartoon Offered by Friend of TCHS 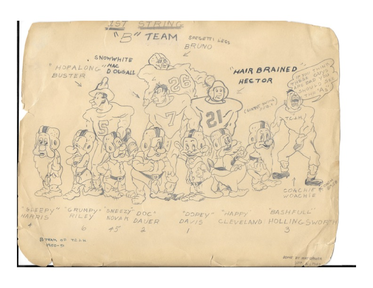 Lisa Moore wrote to the editor saying she has come into possession of the adjacent document. It is an 8 1/2 X 11 inch paper with a drawing of the 1950-51 TCJHS football team rendered as the Seven Dwarves et al.

Temple City Jr. High School was then part of the Pasadena School District before the eleciton of 1954 that created Temple City Unified School District. TCJHS became Oak Avenue Intermediate when the new Lemon Ave. campus of TCHS opened in 1956.

We have been speculating about "where are they now" as we review the names. Your editors were still in elementary school at the time. Emperor and Cloverly schools were newly founded, and La Rosa did not exist.

If you would like to acquire this bit of memorabilia, perhaps for your own enjoyment or perhaps as a prospective donation to TCHS or Oak Ave. please contact the editor at the link below. We will forward your message.

UPDATE: Lisa has given us permission to post her email mtngyrl @ cloud.com; of course you'll know how to correct our privacy tweak. 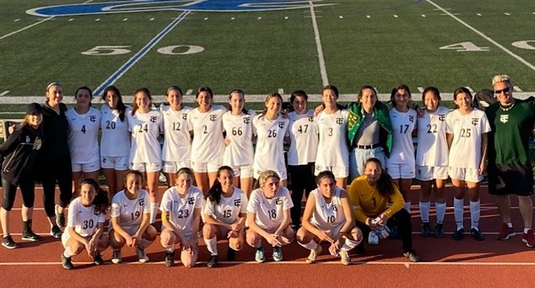 Champagne Toast, Local Micro-Brew, Cocktails,
* Dinner and Dancing *
DJ playing our favorite music from 1967-1970
And lots of "Hey, I remember you –
Whataya been up to the past 50 years?"

Host Hotel – The Doubletree Hotel
924 West Huntington Drive, Monrovia, CA 91016
We have reserved a block of rooms at $145 per night plus tax.
Here is the link to make a reservation: (Not submitted with notice.)
There will be a shuttle to take hotel guests from the hotel to the event and back again. 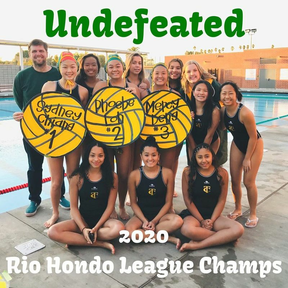 CONGRATULATIONS to our Lady RAMs!!!
The girls rocked it this season with an incredible UNDEFEATED League Season!!
Feb 7, 2020 | Link | 0 Comments
Whip out those clubs! 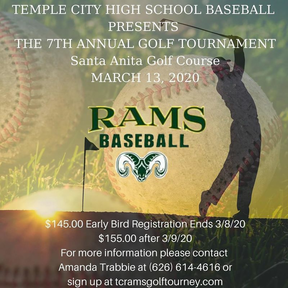 Mar 5, 2020 | Link | 0 Comments
UPDATE - Suspect Convicted in Murder of Peter Bentz '67
A suspect has been charged with murder in the disappearance of Peter Bentz '67, who disappeared in San Diego in November 2017. Thanks to Dixie Crosby '67 for following up on the story.

UPDATE 27 FEB 2020: Dixie Crosby and others report Conviction and Sentencing in Bentz Disappearance. 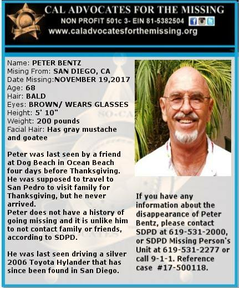 Peter Bentz '67 was last seen by a friend in Ocean Beach last November. He never arrived for a family Thanksgiving dinner. He does not have a history of unplanned absence and is normally in contact with friends and family. The accompanying notice was posted on Facebook in December by a fellow alumnus. Can you help friends and family?

UPDATE 1/24/18 — No further information in the case has been received.

UPDATE 6/14/18 — According to the San Diego Tribune, Bentz has been declared dead, and "a former acquaintance is being accused in the death.

"Police said then that it was unlike Bentz to simply disappear without contacting family or friends."

Police investigators eventually identified Brian Hancock as a suspect in the death. Bentz’s body has not been found.

The Tribune continued, "Hancock, a San Diego County resident, was already in jail on unrelated charges that included cruelty to a child, burglary and possessing drugs for sale. He was re-booked on suspicion of murder on June 8, when he pleaded not guilty to a murder charge with allegations he has past convictions for arson and burglary going back to the 1990s."

Hancock is being held in lieu of $2 million in bail, facing 75 years to life in prison if convicted. Police and district attorney officials did not discuss the relationship between the two men.
Dec 20, 2017 | Link | 1 Comment
ASSOC. EDITOR NEEDED Info
Prefer a TC or other local resident to keep us abreast of happenings there. Please write to the editor if you are interested.