Early buyers will enjoy discounted tickets for the 70s Rams Roundup reunion sponsored by the Class of ’73 entitled , scheduled for October 12.

Sign in and comment below this article and let us know if you're coming or not or join our Facebook group, “Temple City High School Class of 1973 – 45th and counting reunion!”.

To keep current, watch this article for updates or email Wendy Ashton McKenna at wendy.mckenna2@verizon.net or Becky Agajanian Flammang at beckyflammang@gmail.com to get on our mailing list.
Feb 26, 2019 | Link | 1 Comment
The Boys of May 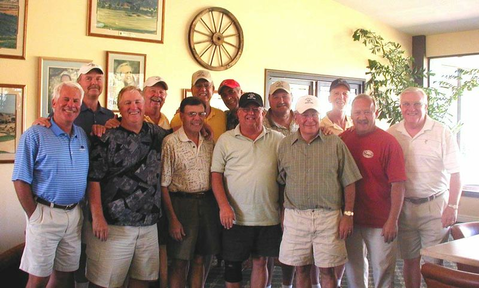 Rocky Curtiss '62 reports: The class of '62 held its inaugural golf tournament on May 16, 2008, at The Ranch at Moreno Valley Golf Club. The "boys" divided into three teams representing Emperor, Cloverly, and Longden schools.

The Longden team of John and Randy Laur, Mark Pocino, and Bill Gorisek were the victors. Other participants were Rich Borger, Ron Fazzi, Joe Terry, Gary Langdale, Roger Gould, Gary Skelley, Corky Fontana, Dick Swan, and Rocky Curtiss. We hope more will join us next year. (Click the image for a larger version.)


We will leave it to your discerning eyes to match the names with the faces after 46 years. After we've had our way with you we hope to reveal the truth.

Jul 16, 2008 | Link | 1 Comment
Class of '78 Resets Reunion Plan
Kathy Keithley and Brad Fagan '78 write: Our Sepember 15 reunion has been relocated to the Double Tree in Monrovia. BONUS: we are lowering the price of the reunion ticket to $89.00! The price includes a drink ticket, passed appetizers, and Charcuterie platters to start, followed by a carving station featuring Beef Tenderloin, Caesar Salad, mashed potatoes, desserts and coffee, all catered by Elements Restaurant, and held on the newly remodeled exterior patio.

More information on hotels, events, and to purchase your tickets. 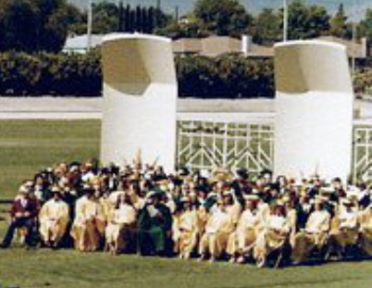 Price of $55.00 per person will include dinner, desert and one drink ticket plus a grab bag. Dress is semi-casual.

** Please bring I.D. and please contact me via e-mail if you plan on attending but you will be paying at the door . Deadline September 10th.

Additional information can found on our Facebook page or classmates.com.

Hope to see you all there!

Harmony (Brown) Plantenga
Harmony Events and Services
626-614-9460
Proudparentofptboyz@gmail.com
Jun 23, 2017 | Link | 0 Comments
TCHS Class of '66 Gala 50th Reunion
We have reserved the Santa Anita Room at the Embassy Suites Arcadia for Saturday evening, October 15, 2016 starting at 6:30 p.m. There will be two Happy Hours...one on Friday night from 5 to 7 p.m. (both complimentary to hotel guests) and again on Saturday night from 5 to 7 in the hotel Atrium. The Breakfast Buffet on Sunday morning is also complimentary to hotel guests in the Atrium. Dress is casual...just please come!

You may buy your ticket(s) online at Eventbrite.com (browse for Temple City High School Class of '66 50th Reunion). You may write and submit your autobiography now, even before you get your ticket(s). You will get the best buy on your hotel room at Embassy Suites if you reserve early...we are not reserving any blocks of rooms because we would be liable to pay for them if they went vacant. Remember to use your Senior Citizen discount and you don't have to pay until you arrive. Looking forward to a resounding turnout! You can also find our Classmates on Facebook...look for TCHS Class of '66 Reunion. "Everyone" is there!

Sep 5, 2013 | Link | 0 Comments
Deja vu all over again for 60s folk
UPDATE: The 3rd 60s Party has been canceled, as no committee or chairperson stepped into the fray, according to Marianne Whyte. Now's your chance, fun fans, there might yet be hope if you're the one. RC

Hello everyone, I hope that you are all well—

The 1st Annual TCHS 60s PARTY aboard the Hornblower in Newport Beach, and last year's TCHS 60s Party at The Landing Restaurant were so much FUN!!! And, it has been so great to reconnect with everyone! Thank you to all who attended for helping make the events such a success!

Due to work commitments with my Real Estate business I will be unable to organize the TCHS 60’s Party this August. (Yes, I know, initially last year I said the same thing—but this year it’s really true!). If someone else wants to step up and Chair the event this year, please let me know. We already have three volunteers to be on the committee—Dick Curtis '62, Linda Whyte Tindell '63, and April Phillips Lancaster '66—but none of them has the time to Chair the event. There must be one talented person who would be an excellent Committee Chairperson—someone who is computer savvy, organized, detail-oriented, and has the time to devote to being in charge of organizing the event!!! So—is anyone out there willing to step up? Help is available from the committee and from the alumni association news pages.

Unfortunately we have lost several of our classmates and/or spouses since we began our get-togethers two years ago, and it would be sad to let time go by without seeing our friends again. If we cannot find a chairperson promptly, hopefully we can have another event soon.

Please remember to go on to Facebook and type in “TCHS 60s Party” at the top and “Like” the page if you have not already done so. Feel free to make comments and or upload photos, so that we can keep the page ACTIVE until the next event!

We currently have approximately 800 email addresses for the Classes of '60 to '69. We are missing ’68 altogether. Approximately 4,000 people graduated in those classes. If you know of someone who may not know about this effort, please pass the word or send me their contact information. Or, anyone with more complete class email lists who would be willing to share them with us… we would be extremely grateful!!! Information can be found in the news at TCHS Alumni News, too.

All the best to you—stay in touch—and let's see if we can find the perfect person to chair the TCHS 60's Party event this year!!!

(Marianne's monthly Real Estate eNewsletter, “The Whyte Report.” If you are not yet receiving the newsletter and would like to do so—please let her know. Contact Marianne through her alumni listing <a href="">here</a>
May 8, 2013 | Link | 0 Comments
Class of '62 hits links again 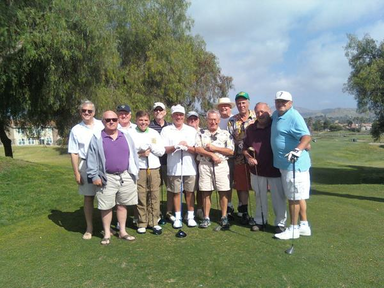 The fourth annual TCHS Class of '62 Golf Tournament and poker weekend was celebrated the Weekend of April 29-30. This year the golf teams were divided up between The Rejects of SGV Car club vs. The Tahitians Car Club; the Rejects walked off with the "Ugly Trophy." 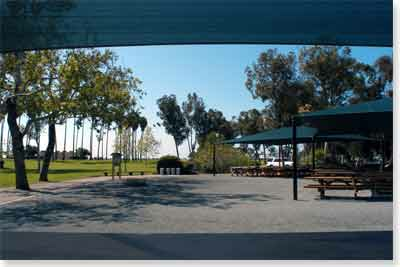 A group of brave alumni have undertaken the adventure of organizing a multi-class reunion of "Seventies People" to take place 10am to 10pm, Saturday, August 14, 2010, at Doheny State Beach. Leading the charge is Sue Sasse Peer (1974).

Space is limited to 500. Reservations are not guaranteed until registration fees are received. So be sure to sign up right away!

Facilities will include: Two large BBQs; 3 Sinks and Counter Space for your use. (Utensils will not be provided – Please come prepared); Picnic Tables (you are welcome to bring lawn/beach chairs or blankets, if you wish).

Food and drink will not be provided. Please plan accordingly. If you intend to stay for the entire day be prepared with a lunch and dinner, as we will be on site until 10pm.

Reservation payments will be applied to park fees, insurance fees and alcohol permit. An oversight committee is in place to monitor all monies collected and disbursed.

Hotel and Motel accommodations are available throughout Orange County, as well as the San Diego County areas. Accommodations can be made via the Internet by contacting specific lodges or more information can be obtained by visiting city and county websites. Beach camping is also available. For camping reservations, please contact ReserveAmerica.

Set it up with my girlfriend that’s in travel.
Carnival cruise three day cruise, all inclusive, all outside cabins category 6b
Friday October 22, 2010 returning Monday, October 25th
Cost: $330.10 per person

If we have enough people we can have a private cocktail reception. We can arrange for all of us to sit at tables that are all located in the same area. People will be assigned seats, but we can all switch around however we want.

Need to have full name of each passenger, date of birth, address, telephone number and credit card number (with address), expiration date. $25 deposit per person to hold your reservation due 12/1/09. Balance won’t be due till June of 2010. I know it’s quick but I think if everyone contacts everyone they know, we’ll be ok – I’ve had my friend reserve 50 cabins for us….if we don’t need 50, it’s ok price stays the same. If more people want to come after December, we can no doubt add them as space allows. Have everyone you know contact me with their info. 714-336-2875.

Exciting, huh? Hope it works for you!!!! 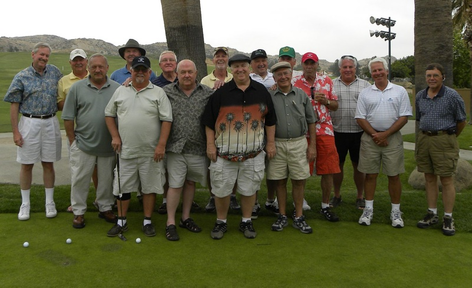 For the second year in a row The Boys of May met for fun and friendship @ The Ranch at Moreno Valley Golf Club. The competition remained as a battle of Elementary Schools with one slight adjustment. To break up the Longden Elementary juggernaut (they had won every previous tournament-one), the teams were juggled as such:

Longemperly and Clovongderor tied at -5 so the championship was decided by a putt-off won by Rich Borger of Longemperly.

It was another successful weekend capped with a poker party Saturday night.

If any are interested in joining this group next year contact Rocky Curtiss (class of 1962) through this website. (Ed. Look Rocky up in the member list; you must be signed in to send a message. BTW, it's up to you to match the names with the faces.)
May 11, 2009 | Link | 0 Comments
Class of '59 Sets Reunion Date
Judy Hoyt reports "the class of 1959 is having a 50th Reunion on August 21, 2009 at the Santa Anita Golf Course Clubhouse, 6-midnight, $50/person. Contact Judy for more information.

The committee requests payment by May 15, 2009, by check payable to TCHS 1959 Reunion, Mike Mauro, 434 E. Rodell, Arcadia, 91006.
Apr 25, 2009 | Link | 0 Comments
Class of 1960 Seeks its Missing
See the Forums for a list of missing 1960 folk. The class is organizing a 50th reunion. Can you help find these people? Some are already listed in the directory but their email has changed and gone unreported. (Hard to imagine, but some people don't notify the alumni assn.; shocking!)

Feb 6, 2009 | Link | 1 Comment
C/1960 reunion planners to 'meet' via 'net
Class of 1960 please note: A group of classmates is brewing a reunion to celebrate 50 years of life after TCHS. And after all, who could know more about brews than that class.

A forum topic has been created to act as a virtual meeting place. The group will also make use of the Chat system whenever someone wants to organize a meeting.

Posted by reesclark60 - Jan 13, 2009 | Link | 0 Comments
ASSOC. EDITOR NEEDED Info
Prefer a TC or other local resident to keep us abreast of happenings there. Please write to the editor if you are interested.